This post contains the notes taken from the following paper:

Ross Girshick is an influential researcher on object detection: he has worked on RCNN, Fast{er}-RCNN, Yolo, RetinaNet…

Fast-RCNN and Faster-RCNN are both incremental improvements on the original RCNN.

Let’s see what were those improvements:

In Fast-RCNN, Girshick ditched the SVM used previously. It resulted in a 10x inference speed improvement, and a better accuracy.

Girshick replaced the SVM by a Region of Interest (RoI) pooling. RoIs are still produced by the selective search, and they are used to select a subset of the feature map produced from the whole image:

At the end of the CNN, without top, a feature map is generated by filter.

Let’s consider as example an input image of size 10x10; At the end of the CNN, the feature map has a size of 5x5. If the selective search proposes a box between (top-left and bottom-right) (0, 2) and (6, 8) then we extract a similar box from the feature map. However this box is proportionally scaled down:

Objects have different sizes, and so are the boxes extracted from the feature maps. To normalize their size a max pooling is done. Note that it does not really matter if the height or width of the extracted box is not even:

Those extracted fixed-size feature maps (one per filter per object) are then fed to fully connected layers. At some point, the network split into two sub-networks. One is designed to classify the class with a softmax activation. The other is a regressor with 4 values: The coordinates of the top-left point of the box and its width & height. 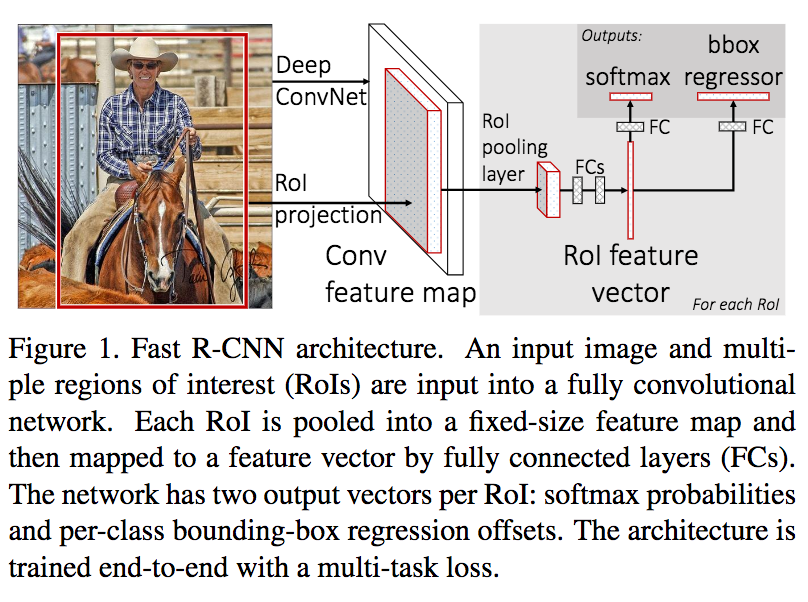 Note that if you want to train your RCNN to detect $K$ classes, the sub-network detecting the box’s class will choose between $K + 1$ classes. The extra class is the ubiquitous background. The bounding-box regressor’s loss won’t be taken in account if a background is detected.

The main contribution of Fast-RCNN was the RoI pooling followed by a two-headed fully connected network. Faster-RCNN eliminated another speed bottleneck: The generation of the region proposals by selective search:

The authors introduced the Region Proposal Network (RPN) to fix this problem. 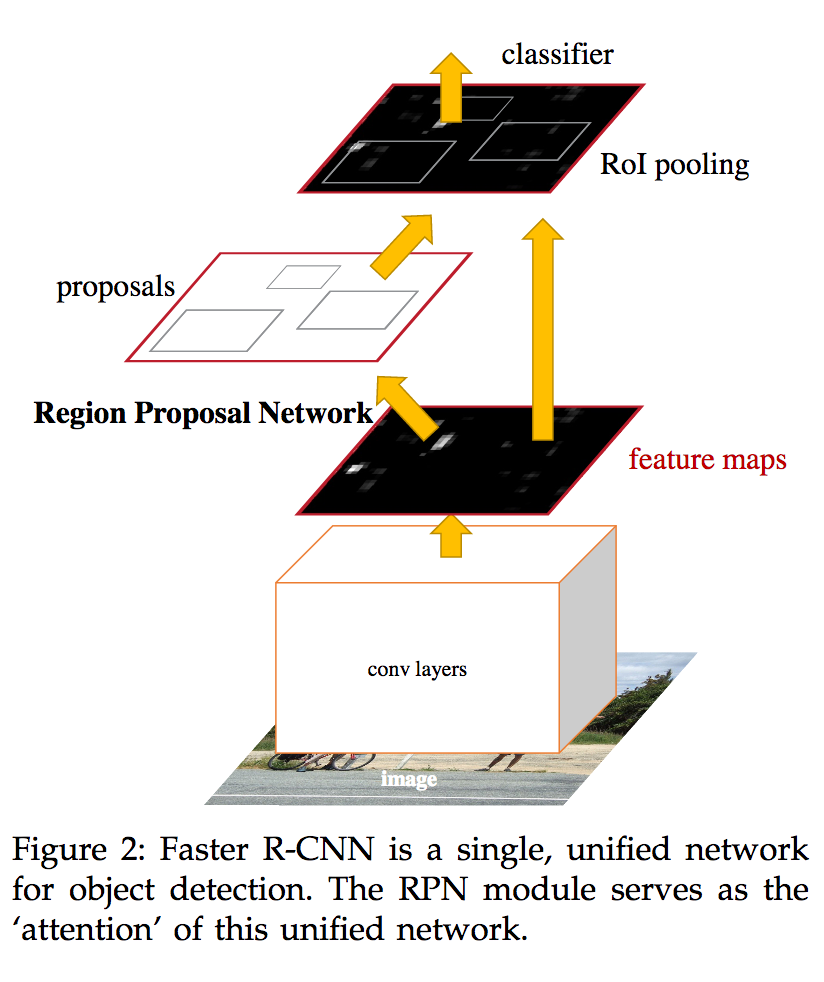 RPN generates region proposals that are given to the classifier which is Fast-RCNN.

Then the RPN uses a sliding window, moving all around the intermediate layers. At each location, anchors are used. An anchor is simply a box of a pre-defined size and shape. 9 different anchors exist: there are 3 different scales and 3 different ratios.

The first two scales, and the three possible ratios.

For each possible anchor a mini-network is used for two tasks: 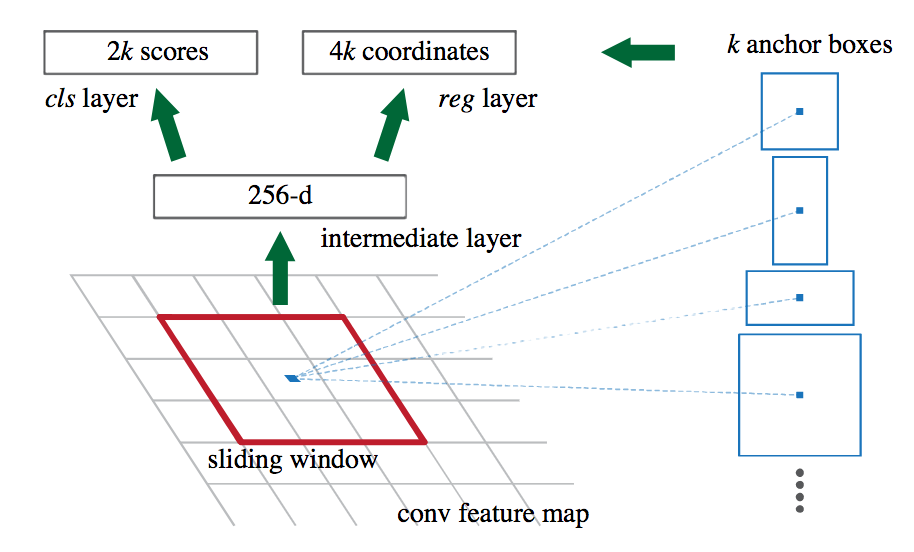 Finally these object proposals are fed to the same top as Fast-RCNN.

In addition of the RPN, I’ve really found interesting how the authors used tricks to train their model.

A big problem of object detection model is that most of the proposal are coming from background (RetinaNet solves this problem elegantly). The authors sample 256 proposals for an image where background and non-background proposals are in equal quantity. The loss function is computed on this sampling.

The features of Fast-RCNN and the RPN are shared. To take advantage of this, the authors tried four training strategies:

These two papers are incremental improvements of RCNN. They introduce RoI pooling and Region Proposal Network.

RoI pooling concept is also used in other models. FashionNet, a model to predict clothes’ attributes uses a concept of landmark pooling to force model’s attention on a particular cloth’s trait.

Region Proposal Network is now used in most object detection models, like the Feature Pyramid Network.